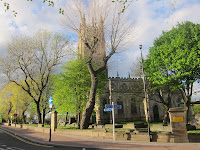 I'm going to try and combine 2 things in one, as I haven't a huge amount to say about mentoring. Also, since I am Coordinator of the MA Librarianship and MA Information Literacy courses at Sheffield University iSchool (advert! - and the picture shows the church/lecture theatre opposite our department) you are not going to find me saying that qualifications are worthless! I obviously believe that we do a good job at Sheffield, but I am going to talk about my own experience, rather than plugging our courses any more.

I worked for a couple of years as a library assistant before I did my professional qualification. Because I hadn't really worked out what I wanted to do when I graduated (with a degree in German) I left it late and didn't get a traineeship at Sussex University Library, but just an ordinary library assistant post. From the position of not having been a trainee, and from what I hear from students, it is definitely worth going for traineeships. As a non-trainee I did get included in the odd trainees' training session, but I didn't get the variety of work they did.

I don't think any library assistant jobs nowadays are as mind-numbingly boring as what I did for my first year, back in the late 70s. I was part of the 4-person team that was the "Interlibrary loans" section. I think that now this function is carried out by a fraction of a person and computers. However, decades ago, the people who wanted articles and books from elsewhere filled out forms, two of us (or perhaps it was even 3, now I come to think of it) filed forms, and retrieved forms, and copied things out, and went to get books off the shelves to post to people in other libraries. We weren't even allowed to check whether books that other libraries wanted were in Sussex's catalogue because checking our catalogue was professional work and done by the ILL team manager. A secretary typed out all the requests onto some kind of tape and ran the requests through to the British Library. You can tell how boring it was when I tell you that doing an hour of shelving every day was the high point. I liked the stripey economics book (Samuelson's! I can still remember the author) because it was nice and thick and if you scooped up a load of those you could look like you had cleared a reshelving hod really quickly. I confess now that I did throw a sickie a couple of days (not something I have ever done since, I hasten to add) because I just could not face the tedium of filing forms, writing out address labels and stacking books on a trolley. The only plus point was that after this any library job was going to seem fascinating by comparison.

In my 2nd year, thank goodness, I got transferred to circulation and periodicals and did some more interesting things. I learnt useful skills, like how to smooth out the reader tickets so that when you inserted a reader ticket and a book ticket in the circulation desk thingy, the machine went kerplunk and recorded both tickets. When people complain about computers taking jobs away - well, some of those jobs were pretty dreadful. Bring on the computers, I say.
I should of course add that, for the time, Sussex was well advanced in the automation stakes, and there were some excellent and amusing people working there. Still, I wasn't unhappy to move on to do my postgraduate qualification, because I didn't want to spend the rest of my life smoothing reader tickets and trying to get circulation systems to go kerplunk.

I did my postgraduate study at what was then the Polytechnic of North London. It was in a dreadful building on the Essex Road, and I had to work really, really hard, but the course was excellent. There were lots of options, and as well as a couple of hours of cataloguing and classification every week, and classes on academic libraries etc., I also did a module on Literacy and Popular Culture (my essay was in social comment in the Archers), and one on Music Librarianship, and there was another module in which I did an essay about Jungian archetypes in fairy tales.... We were shown a computer being used for searching and current awareness, which was as whiz-bang as it got (those were the days before screens, when the text got directly typed onto printout with green stripes - yes, really, online was that slow). 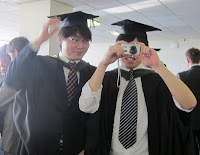 I did actually use a lot of the knowledge and skills I learnt on the course, in some case years afterwards (i.e. there were some things which weren't useful immediately, but were useful later on). I was also glad I had taken modules that interested me, not just the ones that seemed more obviously "useful": I ended up with more enthusiasm for the profession and feeling more invigorated by the whole experience. It was easier to get a job in those days - although I think it is still true that it it is also easier to get a job in London than in other parts of the UK - and my first post continued my education on-the-job. It was part of a small team in the Health and Safety Executive, and ideal, since I was doing a bit of everything, and got some beginner's management experience.

To sum up, my qualification was worth it, and I wish I had got myself organised in time to do a traineeship.

As regards mentoring, I never had anyone who was in quite that role, but I learnt a tremendous amount from people I worked with on professional committees (see - thing 7) and had good good advice, feedback and encouragement. I was just reading a blog posting from someone saying how she had approached someone to be her mentor, who had gladly accepted: I do think that people respond positively to this kind of approach. If they are busy people, being a mentor through a specific project or phase of your job (i.e. rather than indefinitely) might still be something they were willing to take on.
I know that a mentor is different from a manager - but I did have managers who were also good at mentoring (they aren't all). At the moment I've got the role of mentor to a new lecturer in the iSchool - so this blog post has also been helpful in making me think - how well am I doing that?

Photo of an old Plessey/DS library computer system by qisnovus (under Creative Commons via Flickr), other photos by me. The last photo is of two of our students graduating from the Masters' programmes in January: taking a picture of me taking a picture of them!

Email ThisBlogThis!Share to TwitterShare to FacebookShare to Pinterest
Labels: CPD23, My career, Qualifications

Get this widget at roytanck.com